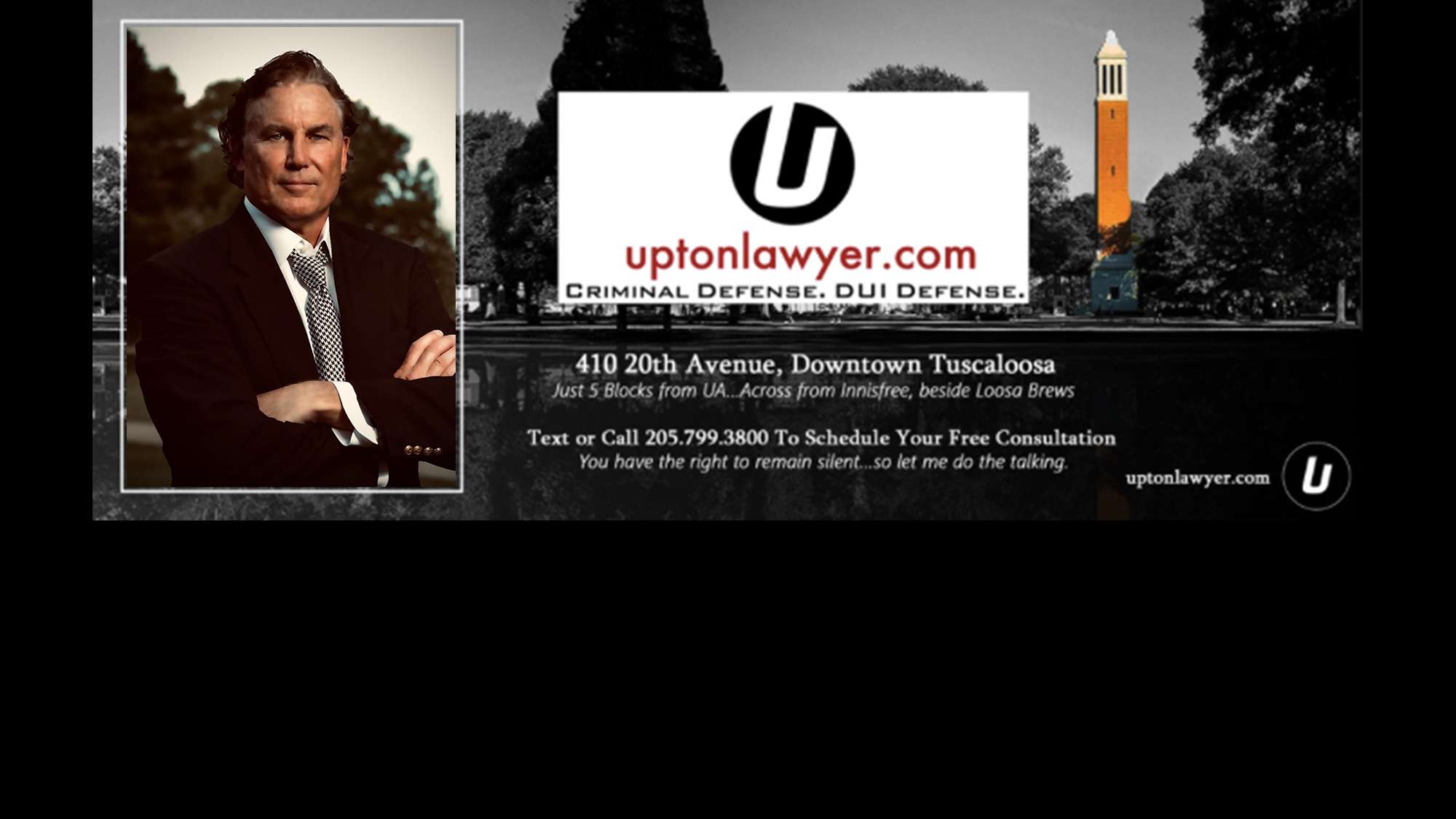 You have the right to remain silent......so let me do the talking.

The lawyer you can text anytime...

...even nights and weekends.

Check Out These Client Testimonials:

If you need a criminal defense attorney in Tuscaloosa, Michael Upton is the man! I was in a no-win situation, and somehow Michael was able to work out a deal on my behalf, and my cases were dismissed. I can't say enough good things about Michael's dedication and professionalism. He really is the best!

Mike was courteous and professional every step of the way, and put me at ease in dealing with a difficult situation. Having his cell number was convenient, and I could text him with questions any time. Mike got me a great result which was the most important aspect. I highly recommend hiring Mike as your criminal defense lawyer if you find yourself in trouble in Tuscaloosa!

My son, a student at the University of Alabama, was arrested in Tuscaloosa. I reached out to Michael and he called me from his cell phone. Being several states away, I needed a criminal defense lawyer I could trust. Michael always kept me posted and got the case dismissed. He does a great job of representing students and helping their parents during a stressful event. I highly recommend Michael!

Great experience with Mr. Upton. Very professional and worked around my packed schedule as a University of Alabama student. Always available and easy to contact. Would recommend to my Tuscaloosa friends if they were in need of a criminal defense lawyer.

I have never known an attorney as good and real as Michael Upton!! It's very hard today to find an attorney that actually listens or shows the concern that Michael Upton shows. I'm very grateful we had him as our criminal defense lawyer in Tuscaloosa!!

Michael Upton did a fantastic job with my case and helped me every step of the way. He's a great criminal defense lawyer and I would recommend his services to anyone.

I was dealing with a frustrating case and needed a lawyer last minute. Michael Upton was one of only two lawyers who even bothered to contact me, and the only one able and willing to help at such last minute. He was very patient and professional, and having access to his cell number was convenient. I was incredibly stressed about this case for a number of reasons, but Mr. Upton was able to keep me calm and provide the help I needed, at a price I could reasonably afford.

I recently had the pleasure of working with Mr. Upton on a legal issue. I was impressed with knowledge, hard work, and attention to detail. He was able to resolve my issue in a very timely fashion for which I am very grateful.

There's not a better Lawyer in Tuscaloosa than Michael Upton. He won my case because he is a hard working attorney who refused to give up. He was patient, kind, and professional throughout the entire process.

Mr. Upton worked extremely hard to win my case, after another attorney had told me it was hopeless. Michael Upton is the most dedicated Attorney in Tuscaloosa. I highly recommend him without hesitation.

Mike is top notch! If you find yourself on the wrong side of the law or needing legal help or advice Mike is your man. He has a genuine care and concern for each of his clients. He doesn't just see $$$ signs. A true breath of fresh air.

There is no one better to represent you in Tuscaloosa than Michael J. Upton. He has years of experience, is very knowledgeable, makes any legal process with his clients as easy and painless as possible. He treats his clients with the utmost respect and professionalism. He is quick to respond to messages, answers all questions in detail and truly stands up for his clients in the courtroom. This is an attorney you can trust to handle your case with 100% dedication.

If you are in need of an experienced, professional, well skilled DUI / Criminal Defense Attorney in the Tuscaloosa area... you need to hire Mr. Upton ASAP. Mr. Upton has a lot of patience and knows the laws and stays current on new findings. He is very relaxed and displays the upmost professional demeanor as well as attitude while in the courtroom. One of the things I admired the most working with Mr. Upton over the past year and a half is his upfront honesty and his interest in being thorough to help you get a better resolution for your case. I appreciate attorneys like Mr. Upton and if you are ever in need don't hesitate to HIRE the best DUI Attorney in the Tuscaloosa area!

Defense of All Drug Charges

With 27 years of experience as a Tuscaloosa Criminal Defense Lawyer, and also representing those injured in auto accidents, I have handled thousands of cases in every local court and many other courts around the state.

I am a courtroom lawyer.

What this means is very simple: I do my best work when your life and livelihood are on the line in Court. Whether it's a murder case, or injuries or death of a loved one as a result of an accident, you want someone that will stand in the courtroom with no fear, and fight for you, even when nobody else is on your side.

My experience as a Tuscaloosa Criminal Defense Attorney includes representation in over 20 capital murder cases, none of which have resulted in a capital murder conviction. In other words, none of my clients in Capital Murder cases have ever received a 'death penalty' sentence or a sentence of 'life without the possibility of parole'. Several of those clients are either already out of prison, or will be paroled at some point, because I was able to negotiate a positive settlement on their behalf. See the links below for examples of Capital Murder cases where the clients were found "not guilty" after a jury trial.

I have also represented clients in every type of felony charge, ranging from murder, attempted murder, manslaughter, robbery, theft and burglary to less serious felonies (including all drug offenses) all misdemeanors, all alcohol offenses, specifically 'Driving Under the Influence', 'Public Intoxication', 'Open Container', 'Improper I.D.' and 'Minor in Possession of Alcohol'. I also represent those whose Driving Privileges have been suspended or revoked (Driver License Suspension) by the Department of Public Safety. Under a new law, I can also help to 'expunge' (clear) your arrest record.

Regardless of the nature of the charge, nobody should go to court alone, and those accused should only hire an attorney that specializes in criminal defense.

My approach is straightforward: if you are accused of a crime, it is only that...an accusation. Based on our constitution, the law presumes that you are innocent. It is the government's burden to prove someone guilty of the crime beyond a reasonable doubt. This 'burden of proof' is the same in every case, whether the charge is capital murder or public intoxication.

Following the 2017 arrest of heavyweight boxing champ Deontay Wilder for Possession of Marijuana, WVTM Channel 13, the Birmingham NBC TV station, contacted me to provide some insight.

Deontay has made a positive impact in the Tuscaloosa community, and as you can see from watching my interview on NBC, he may have a valid defense that leads to a "not guilty" verdict. Contrary to "actual possession", in this case the City of Tuscaloosa will attempt to prove that he was in "constructive possession", a complicated term with many legal factors to be considered by the Judge or jury.

This case is a great example of why defendants should only retain the best, most experienced criminal defense lawyers that routinely defend complicated criminal allegations, instead of just hiring any attorney.

If you are arrested, text me and schedule your free consultation with an experienced Criminal Defense Attorney.

2300 Facebook followers can't be wrong...My office is very close to the University of Alabama campus. Tuscaloosa Municipal Court is just one block away, and my office is only four blocks from Tuscaloosa District Court & Tuscaloosa Circuit Court.

Text me immediately after your first contact with law enforcement (even if they didn't arrest you yet). When we meet, I will explain the legal process, as well as potential results, depending on the specifics of your case. If you are under 21, I will walk you through the 'Youthful Offender' process.

You will meet with me, not a secretary or a law clerk.

And if you are a University of Alabama student here without transportation, I will travel to meet with you in a convenient place such as Starbucks on campus, as I've done many times for my clients.

Whether arrested (e.g. DUI, Public Intoxication, POM), or issued a citation for Minor in Possession of Alcohol (MIP), Open Container (Open Beverage) or Improper ID, make sure you walk into court with an experienced Criminal Defense Lawyer.

I've been practicing law for 27 years. From time to time I am contacted by our local news media to offer insight regarding noteworthy criminal cases.

In June, 2018, Alice Johnson was released from federal prison where she had been sentenced to life without the possibility of parole for a low level drug offense. It was her first conviction.

Her plight had captured the attention of a celebrity that was able to use her influence to convince the president to commute Ms. Johnson's sentence. During the interview, I discuss the notion that there are many others like her, serving outrageously harsh sentences. Our government leaders need to identify all inmates in a similar situation as Ms. Johnson, and begin the process of releasing them as well.

This should not be a one time instance of a single inmate 'hitting the lottery', but rather should become a non-partisan cause, where potentially productive members of society are released instead of rotting in our prisons.